The Architecture Museum mounts changing displays both in its dedicated display areas and in galleries in Adelaide and the metropolitan area.

During the Postwar period many religions implemented substantial change or modernised to become more inclusive and relevant to their congregations. This changed the way they connected to their community, practiced their faith and created a sense of place. Fundamental to these modernisation aims was their expression in built form. In some instances interdisciplinary design collaborations between architects, artists and other professionals resulted in the holistic design of space including structure, interiors and landscapes.

This exhibition presents sixteen key places of worship which demonstrate the development of religious architecture in South Australia during the years 1945–1990.

Unplanned Adelaide : streets between the gridlines 1837-2018

The formally planned streets of Adelaide facilitated and in part determined the city’s growth. Patterns of acre squares and city blocks still dominate the drawn plan and built composition. However, the network of unplanned streets and lanes which reaches across city blocks and town acres is a record of collective endeavour and individual lives, played out between the gridlines.

Do you know of any heritage that is ‘cool’?

A panel debate was also held in August 2018 to discuss the ideas around heritage.

This exhibition was arranged for the State of Australian Cities (SOAC) conference 2017 and opened in conjunction with the Tom McKenna Memorial Lecture delivered by Prof Robert Freestone, University of New South Wales. The SOAC conference and the Memorial Lecture marked 100 years since Australia’s first Town Planning and Housing Conference and Exhibition, held in Adelaide in 1917. That event was supported by the Commonwealth and state governments and organised by Charles Reade, South Australia’s Government Town Planner, and Victor Ryan, Director of the Tourist and Intelligence Bureau, with the assistance of state-based committees.

The 2017 retrospective exhibition was curated by Christine Garnaut and was on display 28 November – 8 December in the School of Art, Architecture and Design’s Planning students’ Study Room, Kaurna building, with a satellite version of the exhibition at the Adelaide Town Hall where it was on view 27 November -19 December. The exhibition was re-presented at the Office for Design and Architecture SA at Leigh Street, Adelaide, from 10 January to 15 March 2018. 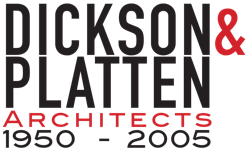 This retrospective of Dickson Platten’s work celebrated their achievements over 50 years in practice and their vision for housing now and in the future.This exhibition on the work of Newell Platten and Robert Dickson shone a light on an intense oeuvre of architectural output from the 1960s, 70s, 80s and 90s. Using the archival collection of the architects held by the Architecture Museum and curated by Michael Pilkington of Phillips Pilkington Architects and Julie Collins from the Architecture Museum, and featuring new photographs by David Sievers, this exhibition was part of the Festival of Architecture and Design and Open State.  A book produced for the exhibition is available for purchase from Phillips Pilkington Architects. 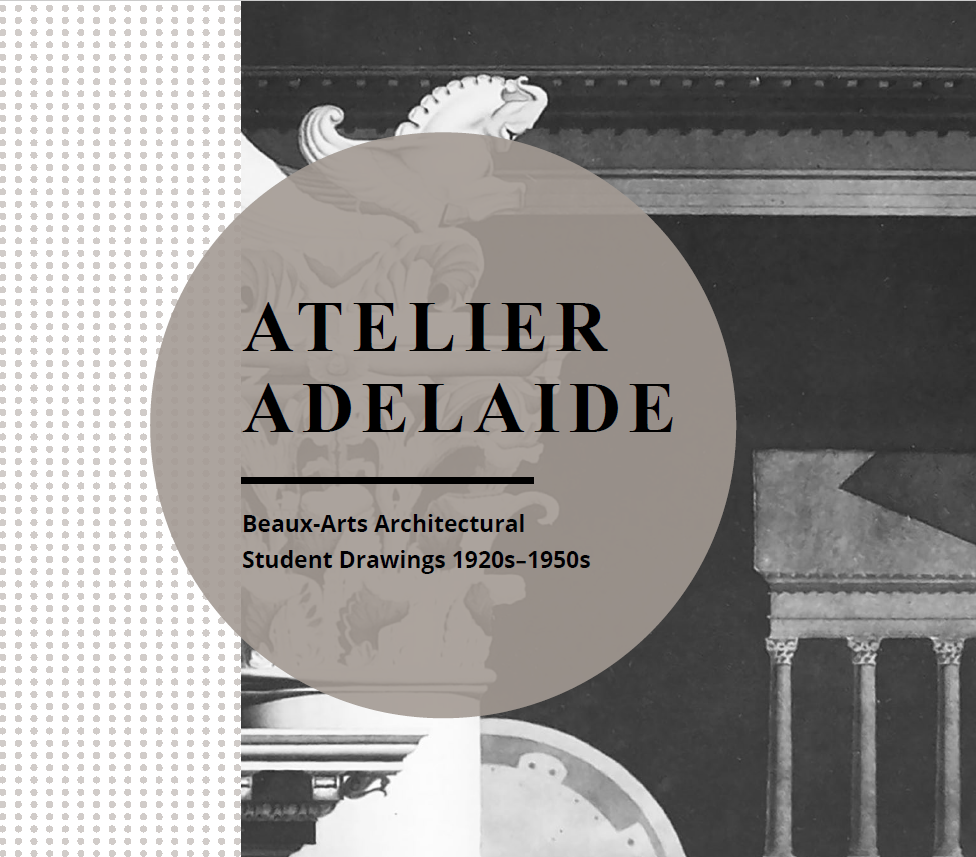 This exhibition showcased the drawings produced by South Australian architecture students between 1926 and 1958. During this period, the Architectural Department at the South Australian School of Mines and Industries (now the University of South Australia) adopted the American Beaux-Arts system of design education with students producing exquisitely hand rendered works. This exhibition was curated by Dr Susan Lustri and drew on the work of her PhD thesis, ‘Traces that remain: The Contextual Significance of Historical Architectural Drawings’. The exhibition was a 2017 History Festival Event. 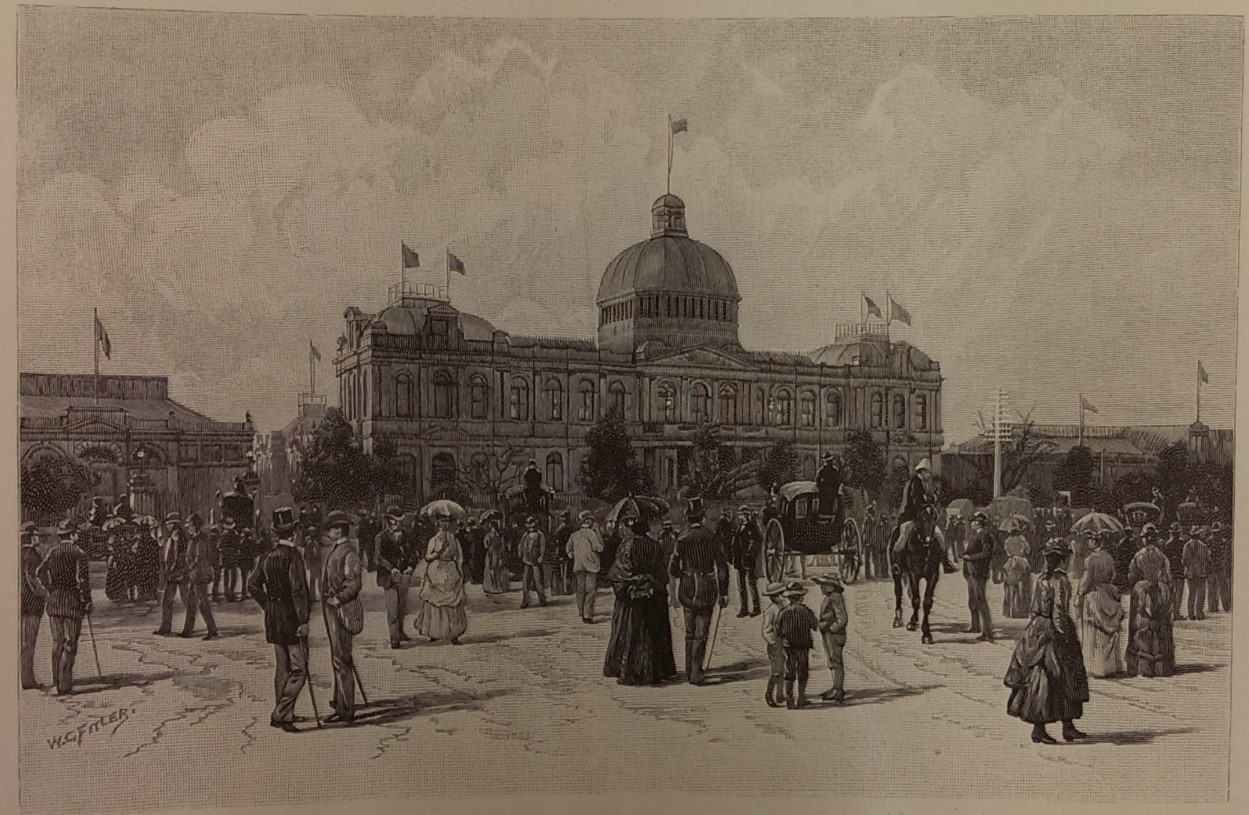 Adelaide’s Jubilee International Exhibition 1887-1888: The Event, the Building and the Legacy

For seventy-six years the Exhibition Building stood proudly on North Terrace. From its opening as a showpiece in which to hold the 1887 Adelaide Jubilee International Exhibition, to its role as venue for the Royal Adelaide Show, and home to the South Australian School of Art and the South Australian School of Mines and Industries, the Exhibition Building has played an important role in the social and cultural lives of South Australians. Drawing on cultural and archival collections, this exhibition explored the 1887 Exhibition and its legacy, and tracked the building’s subsequent uses until its untimely demise in 1963.

On Paper: Unbuilt works from the Architecture Museum

An Exhibition of unbuilt works for South Australia from the twentieth century including urban schemes, buildings, unsuccessful competition entries, student drawings and sketches.

‘On Paper’ featured unbuilt works by architects, planners, and students throughout the twentieth century. From schemes for Victoria Square and a subway under King William Street, to plans for Monarto and office buildings never completed, this exhibition was roll call of ideas which never got further than the drawing board.

This exhibition explored the emergence of distinctive home design in modern Australia and its role in the formation of an Australian lifestyle and culture. A behind-the-scenes exploration of 29 of the most important Australian homes of the past 60 years. Beginning in the 1950s with the works of a new breed of Australian architects, and culminating in key works from some of Australia’s contemporary masters.

Living Sites of Mourning: Soldiers’ Memorial Gardens in South Australia Memorial gardens, or gardens of honour, were established in SA around WWI to acknowledge the sacrifice of local citizens in the ‘war to end all wars.’ One of the earliest was at Victor Harbor. Unley’s Soldiers Memorial Garden opened after a community fundraising effort purchased the land and constructed a rotunda and gardens. The exhibition includes examples of a selection of metropolitan and country memorial gardens.

An About Time History Festival 2015 event co-sponsored by the Unley Museum and the Architecture Museum.

Cultivating modernism: French garden style of the 1920s and 1930s

The Architecture Museum hosted an exhibition drawing on rare art deco prints and publication of French exhibitions. Cultivating modernism: French garden style of the 1920s and 1930s provided a rich coverage of Cubist and other decorative approaches to garden design.

Build me a city: An exploration of the archives of the Architecture Museum by seven artists

This exhibition resulted from collaboration between the Architecture Museum and the Australian Experimental Arts Foundation, with curator Vivonne Thwaites, writer Ruth Fazakerley, and artists Jacobus Capone, Kirsten Coelho, Nici Cumpston, Nicholas Folland, Lily Hibberd, Sandra Selig and Sera Waters. The artists’ works are a reflection of time spent in the archives of the Architecture Museum examining items as diverse as blueprints, drafting tools, nineteenth century books and black and white photographs, inspiring them to create new work as varied as the items they examined. The exhibition was supported by Arts SA.

Designing for Communities: The civic architecture of Russell & Yelland Architects

Russell & Yelland Architects is a South Australian firm established in 1939 by Charles Alexander (Alec) Russell and Keith Mills Yelland. It has a long history of working in metropolitan and country South Australia as well as in parts of regional New South Wales and Victoria, and on projects across a variety of sectors. The exhibition focused on the practice's civic architecture and on the ways in which it worked closely with local people to design facilities that met their needs and budgets. The exhibition drew on the substantial collection of Russell & Yelland drawings held in the Architecture Museum at UniSA and on items from Russell & Yelland's own archives.

The 'Great Australian Dream', was the focus of an exhibition developed as a partnership by History SA and the Architecture Museum, UniSA. Co-curated by Julie Collins and Mandy Paul, Suburban Dreams: house and home in Adelaide 1945-1965 explored how the shape of Adelaide was transformed by the hopes and dreams of ordinary South Australians in the postwar period.

The dream of a home was a powerful force in the decades after the Second World War, as many South Australians made new lives, new families and new communities. In the austere 1940s housing was hard to come by, and demand was soon fuelled by the baby boom and immigration. Shortages led to new design and construction methods as people struggled to make do. By the mid-1950s hardship was giving way to prosperity, and dreams changed as people took on new ideas about houses and how to live in them.

This exhibition included original objects, architectural plans and drawings and specially-commissioned models which showed different housing styles of the period. It also featured stories about particularly South Australian approaches to providing housing, including the South Australian Home Builders' Club and the SA Housing Trust. Suburban Dreams explored the architecture and design of the postwar period, including the stylish 1950s, and looks at South Australian society in a period of rapid change.

Read more about the History Trust of South Australia.

The places provided for children reflect society's attitudes towards them. Reform, Fitness and Fun is an exhibition exploring the intersection of child development and play theories with the design of public playgrounds in South Australia. It draws on historical resources and sites from across the state and overseas, and on the expertise of a multi-disciplinary team of child development and play specialists, historians, architects, and landscape architects.

Architectural preludes: one hundred years of student drawing examined shifts in the theoretical approaches to design education from the days of the School of Mines through to the present. It focused on measured and design drawings influenced by Beaux-Arts, modernist and postmodernist thought as well as the broader context of the times in which they were produced.

The exhibition evolved from research undertaken by the School's PhD candidate Susan Collins for her thesis 'Traces that remain: the contextual significance of historical architectural drawings'. Drawings in the exhibition were selected from Architecture Museum collections. Collections Manager Dr Julie Collins and Susan Collins curated the exhibition and prepared an essay for the accompanying catalogue.

Unwrapped: collections from the Architecture Museum

The inaugural major exhibition Unwrapped, was the first expose of the Architecture Museum's holdings, and coincided with its official opening in the SASA Gallery, Kaurna Building, City West campus, on 24-27 May 2005. Curated by Dr Julie Collins and Susan Collins.

The Architecture Museum was launched, and the exhibition formally opened, on Wednesday 25 May at a function held between 6pm and 8pm in the Museum, Gallery and level 2 foyer. Approximately 200 invited guests attended including UniSA’s Vice-Chancellor and President, Prof Denise Bradley, who spoke, and Ms Margaret Anderson, Chief Executive of the History Trust of South Australia who officially launched the Museum. Donald Leslie Johnson and Professor Donald Langmead, who were both significant in beginning the collection, were present for the occasion.